Our mission, should we choose to accept it, is to "spike" a map drawing program. We know nothing about maps or drawing, and very little about programming. How might we proceed?

I’ve been chatting with some colleagues about a possible application. My purpose in working on it here, in this article, is to give a little insight into how it’s possible to “get started” when it seems that you really don’t know enough to do anything. We’ll see how successful I am.

Suppose that we had access to mapping information from the various map-serving companies: Microsoft, DeLorme, whoever. We know they’re out there; even if we don’t know all their names, we could probably find out pretty quickly. And suppose that we had access to the location of something or somebody interesting: our kids, our rental cars, our truck drivers. We know there are people interested in the locations of people and things they’re interested in. We could write a program that people could use to find out where their things are! This could be worth millions!

Now, like it or not, this is just about where every new product idea starts. Someone has some notion of putting together a couple of technical things, or has a vague notion that the world would be better if only. The possibilities are immediately endless. Everyone needs this product or service! It’s obvious! Probably right now, there’s something that you’d like to know where it is.

Now we could do a lot of analysis, look into mapping companies, assess their software, look at programming languages and environments, figure out what they have to offer, check into the market to see who has lost their truck recently, and so on. And maybe that’s a good thing for someone to do. But often, the entrepreneur wants to know something else: how hard would it be to write this program? Or he may want a functioning prototype of the program to demonstrate, to raise interest and assess the market.

We’re Extreme Programmers. Our mission is to find out the things we need to know to answer how hard the program is to write, and to provide a demonstration of what’s possible.

We always have assumptions. Here are some of ours, in more or less random order:

We could go on and on, no doubt, and some feature provider surely will. But I’m thinking we already have enough information to ask some questions and start getting some answers.

Here are some things I’d like to know right now:

I feel that if I knew that much, I’d know a lot about the essence of the program. I’d be left with unknowns about details, and some of those details could take time. But mostly I wouldn’t expect them to change the essence of the design. Am I right about that expectation? Well, let’s talk about it later.

Here are some things I’d like to know pretty soon:

Does that last one seem a bit too brave? Well, we’ll see. But I know a little bit about how zooming and panning are done, and I figure there’s probably some support in my language, so while it might add work if we have to do it, I don’t think it’ll change the essentials.

I’m going to do this experiment in VisualWorks Smalltalk, just because it’s this year’s tool of choice. Before deciding how to really write the program, I might implement it again in other languages. Maybe C#.

I don’t know how to do graphics in Smalltalk, but I know it’s in there. A little surfing and digging through the documents takes me to some examples. The examples all draw on a window, but not in a pane of the window. But still, they’re interesting, and in an hour, I have this sample code:

We’ll look at that in a little more detail in a minute, but first look at what that draws: 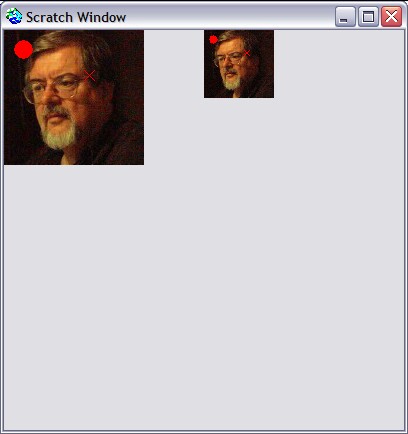 Two pictures of me, one larger than the other. A red X near my left eye. A red dot near my forehead. Now let’s review that code:

OK. That sets up a window, grabs its “graphicContext”. That’s a thing you can draw on. Then we read in an image from a convenient jpg file. The patch ends by displaying the image on the context. That, very likely, displays the big picture of me. What’s that stuff in the middle? We loop zero to ten. At the point (40+xy, 40+xy) we put red. That should draw a red diagonal line going right and down, right? (increasing y goes downward.) Then at (50-xy, 50+xy) we put red. That will start x at 50 and count back to 40, also increasing y (down). That’s a red diagonal line going left and down. That code draws the X.

We create a new image, shrunken by 2 in each direction. Reading the Image>>shrunkenBy: method, I learn that you can shrink an image differently in each direction, and that you can only use integer shrink sizes. Can’t shrink by 1.5. That means the smallest zoom out we could get would be a factor of 2, if we use this feature in the obvious way. Not great news but let’s not panic.

We also learn that we can display an image anywhere in the graphics context, by using that #displayOn:at: method. Now, what about other ways of drawing? We create a circle object. That’s just an object representing a circle of radius 10, centered at (0,0) (that’s 0@0 in Smalltalk terms). But the circle isn’t displayed at 0@0, because we said

That means that whatever we tell the gc to do from now on, it will add 20@20 to the coordinates. So when we say

The circle goes to 20@20, on my forehead in the leftmost picture. Then we experiment a bit more. We make a smaller circle, scaled by 1/2. And we move that circle, from 0@0 where it started to 210@10. Since we put the littleRon picture at 200@0, that should put the little circle in the same place as in the big picture … except that the graphicsContext is also translating. If we leave that alone, the circle will show up at (200@10) + (20@20) or 220@30. That would be wrong. So we set the gc translation back to zero, and display the circle.

Why am I doing the same things in all these different ways? Because I’m trying to learn a little bit about what’s possible in display. Here’s some of what I’ve learned:

So this experiment has told me quite a bit about how graphics work. I didn’t just type that whole thing in all at once, of course. I did it a little at a time, and I made plenty of mistakes along the way. Still, it only took me an hour. I tried lots of little tests: here’s another one and its result: 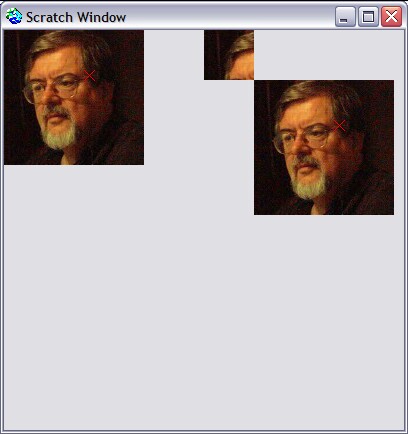 There’s some interesting learning in here. See that code about clippingRectangle? That’s saying that no matter how big the graphicsContext really is, further operations should only affect the area 250 wide and 50 high, starting from the top left corner. So when I write the image at 200@0, only the top left 50 pixels of Ron show up. I also tried this with the translateBy: first. That didn’t work as I expected: the whole x-width of the picture showed up. I believe that means that the clippingRectangle is adjusted by the translateBy: method on the way in. I’m not sure of the details, though I see that they interact oddly. We’ll be able to do whatever we need, so I”m not interested in digging into that any deeper right now.

So. A couple of hours of fiddling around in workspaces, and I know a lot more than I used to about graphics in Smalltalk. That’s good. What might have been better?

It might be argued that I should have done all this with tests. Well, I don’t know how to do graphical tests very well, since I need to see with my eyes what happened. So I tend to start with little experiments.

But maybe I should have recorded those tests, at least, as a Smalltalk class. That might make good sense. Honestly, I’m not sure when I go for a class and when I just experiment in a workspace. For sure, though, if I don’t record these little patches of code somewhere, I’m likely to forget what I did, and have to relearn it. That’s definitely worth thinking about. There are a lot of options. I can save the workspace contents directly as files: that’s a feature of the Workspace object. Or I can save the code as files on my own. Or I can build up some classes. It’s even possible to do nothing, and leave the code lying around in Smalltalk’s changes files. I’ve done that in the past: worked on something that I didn’t save, and later on searched all the change files to find it. That often works – but not always. It’s possible to “compress changes”, which causes Smalltalk to throw away any code that isn’t currently in an existing class or method. We’ll have to think about how much of this to save, and how much will be likely to appear in real code that we’re about to write.

That’s all about documentation, and I’m going to digress to talk about that next. Stay tuned.

For now, we don’t have any tests, nor do we have any objects. But we do have some new comfort with graphics. We’ve seen how to display a JPG in Smalltalk, at least right on the surface of a window. There’s probably more to putting it inside a window pane, but if all else fails, the clippingRectangle: could help us with that. We’ve seen that we can scale things up and down, and that we can move their origin around.

Hey! That’s almost everything we need to do graphically in this application. There will be lots of details, but for me, I’ve changed my situation from one of fear and ignorance to a little less ignorance, and a lot less fear. Time for a break!