My friends and colleagues in the #NoEstimates circles have some good ideas, as I've commented elsewhere. I'm left, though, with a couple of concerns.

First, if someone with a need and money to spend wants to get started, what should they do? It doesn't seem like good advice to tell them to start spending money and see what comes out. After all, not every team they might encounter can even deliver product in the necessary incremental way. Furthermore, the buyer might not want to start at all if the costs are going to be huge. They may only have one shot at this venture.

Second, given that there are a lot of people with problems and a desire for some way of estimating the cost, people need some help with techniques for weaning them away from estimates where it's possible. We could use a better understanding of our options when people want estimates.

It happens that I have something I'd like to have built, and I'll write it up here. I've created a Google Group, NoEstimates, to discuss this and similar concerns. I would also invite interested people to write articles of their own, on their sites, giving more extensive answers. Of course, if you want to submit an article for this site, I'll be happy to look at it for publication.

We have frequent power failures in our area. In an attempt to make them stop, I recently had an automatic natural gas generator installed. I figure this rather large expense will almost ensure that no further outages occur, and if they do, the generator will probably come on line and keep my house in life-giving electricity. (Our water supply runs on electricity. The toilets won't flush without power. My wife will leave me if we don't have operating toilets. This is important.)

As an experienced software guy, I can think of ways this could go wrong:

There may be other interesting failures. Even this list gives me enough to worry about. And I do, especially if I'm away from home.

There is an existing product that addresses some of these concerns. It consists of an attachment to the generator, with its own cell phone connection, and it notifies you when certain things happen. Some of them are things I'm interested in. It seems not to address all of my concerns, and it requires a Verizon phone contract in addition to a costly product price and installation.

I have in mind two possible "products":

This is a knowledgeable layman's vision of the product. It's intended to say how it might work. You're the technical people: you can tell me how it should really work.

I imagine three "sensors". One is on if incoming line power is on. One is on if the generator is running. One is on if a circuit in the house is on. Their status tells us some interesting stuff.

As I look at this, I realize that there are interesting sub-cases in that last row. Is the power just coming back up and the generator preparing to cut over to line power and then shut down? Is the house actually running on generator power, or is the generator just running for some reason?

I was going to mention this later but I'll mention it now: The generator starts up as a test, once a week, runs for a while, then turns off. That would produce the On/On/On situation and would be OK. But it does not cut the house over to generator power, which would cause power glitches (I think) and would be bad. My VCR would flash 12 and stuff.

So maybe we'd like to have another sensor that's on if there is power on the generator side of the line. And it would be nice to have a sensor saying which kind of power was running the house. The only way I can think of doing that would be to physically sense the cut-over switch. That might be hard.

I should mention that the generator powers the whole house. There are no circuits that are powered only on line or only on generator. I can see that it would have been nice: I could have had a couple of light bulbs or LEDs or something. But that's not how it is. Anyway, if this ever becomes a real product, it needs to deal with wiring as it exists. We can't go around requiring people to rewire their house.

Once we have these sensors, however many, we need a way to collate and interpret them. I can imagine: 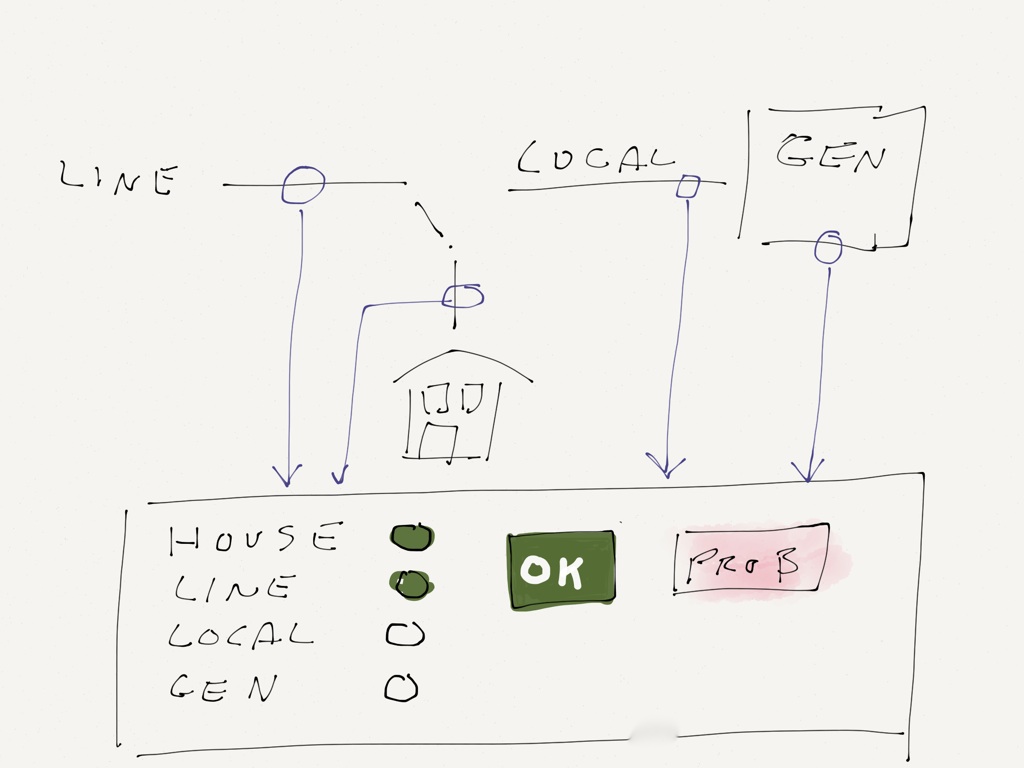 Clearly there could be other kinds of sensors. What is the house temperature? Is the refrigerator running? (You better catch it before it gets away.) Is there water in the cat's bowl?

There could be actuators. Maybe it'd be possible to set the thermostat or lock and unlock the doors. And so on.

There are home automation products out there that do some of those latter things. If there is one for managing generators, I have not found it. I am inclined to limit our attention to the generator problem for now, but it seems clear to me that once one has the basic aspects in place, there might be additional applications. I would not expect to have to invest a lot in futures, but would expect the system to be well enough crafted to allow for extension.

I'd really like to have one of these for my house. If it could be made inexpensively, I would consider having a kit made and marketed. Perhaps a Kickstarter campaign or the like.

I do not have the knowledge, especially at the electronic level, to build this thing. I don't know how to build a sensor that detects electrical activity, but I know that you can buy a probe at the hardware store that beeps near an active circuit. Probably induction, I'm guessing.

So that thing opens or closes a circuit and triggers a beep. Some simple transistor or logic circuit?

Then it would need to connect to the system logic and display unit. It could be that we'd use a wired connection but since that could involve stringing wires all over the house it wouldn't be very practical. Could each sensor connect to the home wireless if you had it? Some kind of Bluetooth connection? Wouldn't that be too short ranged? A little radio network of some kind, like the garage door opener? I don't know. Someone surely does.

On the software side, it seems that something like a little web service could do the job if the sensors had a connection to the wireless. I have wireless, so could live with that. They could all talk HTTP to some service running. Should we just assume wireless, and a live PC for the real system? Or connection to the Internet and a cloud service? There are web cam companies that stream to and from their own service on the Internet, so that might be feasible.

Or maybe there has to be a "box" that all the sensors talk to via some connection (wires, Bluetooth, some radio thing) and then that single box has the Internet connection. If it was just one box it could perhaps allow either a wired or wireless connection. I'm inclined to think we can assume wireless is available. Maybe a Raspberry PI or similar could do it, if we could get the sensors build and hooked to it. For the generator installation, wired connections from sensors to the box would probably be acceptable. We can worry about other sensors and such later if at all.

Should I go ahead?

If I knew enough about these things, or had a circle of local friends who did, I might be able to figure out whether to go ahead with this. If it was enough fun and/or inexpensive enough, I could build one just for fun. As it happens, I don't have the expertise, and I don't quite have the free time to learn enough to do it. Other stuff on my plate.

People will want to know what it's worth to me. Well, the commercial product will do most of what I want. I think it's about $500 installed, plus a forever Verizon contract. Maybe $750 the first year, and, what, $250 a year thereafter? I have no idea what the phone contract would cost.

I really don't think I'd take the thing to market but let's assume that we did. Looking at the price of home video attachments to the TV, we see prices dropping to around $100. Home automation things like Nest are coming in around $250. Alarm companies are charging more. I think this is a niche product, since it only supports home generator customers, although it could perhaps appeal to people who are concerned whether their refrigerator is escaping. I think it has to come in around $100, maybe a little more. If there was an associated Web service that could be maybe $9 a month? Could SMS to your phone be extra? I think not. At a random guess, we can get $100 a year in revenue from each of these things. Hardware cost around a third? Service for the web, let's call it very low cost per item. Let's guess net revenue $50 a year per installation. Tech support, etc etc. I don't know. Stick with $50.

There are three generators within earshot of me. So there are probably tens of thousands in the USA. Guess 100,000. We sell to one percent of them, 1000. Revenue $50,000. But if we could get ten percent, half a million. Ten percent seems unrealistic.

What would I pay to get the first one?

I think it's interesting. I would kick in some of my time. I would pay for reasonable amounts of hardware, a few hundred bucks. If there was off the shelf stuff that could do some of this, that would be good.

So, I'd pay $500 to get one of these. If I believed in it as a product, a few thousand. But I'd really want to see some solid progress on it.

And here's the rub: I'm willing to lose $500 or even $1000 once. If I go in on this thing, I'd want to be pretty sure something would come out, at least some good learning. That's because I'm kind of into weird technical stuff and I understand learning and Agile ideas. If I were just some guy wanting one, I'd want reasonable certainty that I'd get my device.

So let's assume I'm somewhere between just some guy, and me, and that I've got a few bucks to spend on a working prototype, and maybe a few more if we decide to make the product.

Let's discuss this on the Google No Estimates Group. The big question, of course is whether there's some way to convince me, the "buyer" to go ahead without any estimates at all. I've already estimated things here in the article, and if you know hardware or software, I kind of think you can estimate things similarly. But if we can do without estimates, that'd be swell. Let's find out.