Put makeup on your own pig, make it look as good as you can. Don't go around finding ugly imaginary pigs to stand it beside.

Warning: This article may contain sarcasm and ranting.

Do you have a good idea about how to express something that those guys said a decade and a half ago? Well, then, just say it. You could even set it in context. Here are two ways to do it. One of them is much better than the other in my opinion.

"Individuals and interactions over processes and tools." That may have been all they knew way back last century, but today we know a hell of a lot more. The real idea is to make decisions about processes and tools at the right level. Often that level is well above the pay grade of the so-called "team". (And so on.)

"Individuals and interactions over processes and tools." Here's one way I like to work with that Agile Manifesto value. We need many tools in the doing of our work. Wherever possible, I like to let each team select its own tools and process. There is a need for consistency in a few areas, but fewer than you might think. (And so on.)

The first approach tries to set you up as smarter than those other guys. You're trying to set yourself off from others, by tearing them down. Tearing down the other person doesn't make you taller: it makes you seem small. Maybe your idea is better. Maybe you are smarter. Let your idea show how smart you are. And why set up opposition for yourself. Some people value those old ideas. Do you really want to start by telling them they're wrong?

The second approach builds on the good things in the past. Referring to the past that way lets you associate yourself with ideas people respect, and makes your ideas seem to fit in with what people already know and care about. You reduce resistance to what you're saying, making it easier for people to hear you.

I often tweet reminders about the straw man from time to time, referring to this picture, entitled "Idea looking comparatively good next to a straw man. 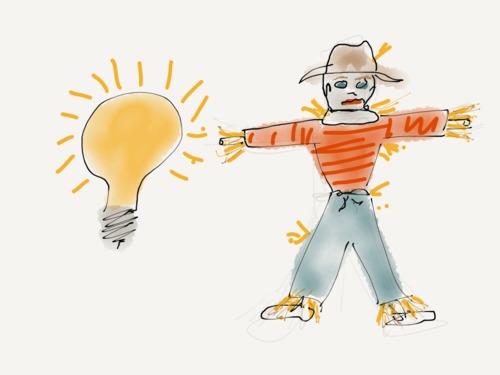 Keep your straw man. Just tell me what you think. There is no need to quote -- or more likely misquote -- someone else to make your idea look better to me.

OK, that said, I'm going to put down some straw men of my own, entirely made up examples no one really said. No one would say them, I'm sure. They're just made up examples of what not to do, because I need to rant today.

I hate those guys who push Idea X. They're just doing it for the money. I'm glad I took the high road.

Yeah, well, intercourse you and your penguin. The people who push IdeaX mostly believe in it at least as much as you believe in ... in ... what is it you believe in, actually? Are you just here to whine about those other unnamed people? Is the problem really that they're just doing it for the money, or might it be something closer to home, like regret for your own past pathetic decisions? Get over the past. Tomorrow is a new day.

Are you really satisfied with your life? If so, tell me how you managed it. Or are you jealous of someone else's life? Keep that to yourself.

Those guys had a good idea back at the beginning of the century but what they said should be updated to what we know now.

See previous advice regarding your aquatic flightless bird. Instead of whingeing about what somebody who isn't you did years ago, why not come up with an idea or two of your own? And instead of using your critique of those people to launch your wondrous and doubtless fascinating advice, come up with a new name.

Tell me your idea. Maybe you can even find 13 other people to help you create your marvelous new idea. Get it out there. See if it can stand the test of time.

Some people think Stupid Idea A. I teach Smart Idea B. Hahaha on those other guys. I am smarter than they are.

Where are all these fish-reeking black and white flappy creatures coming from? It's starting to bug me. No one with even minimal credibility ever supported Stupid Idea A. You twisted the words of ten smart and sincere people to create that ridiculous idea, which is held by exactly no people anywhere. You aren't just trying to make yourself, and your idea look good, by any chance?

Just tell me your smart idea. No need to set it up by surrounding it with stupid ideas that your readers don't believe anyway.

Make your own lawn look good. Stop throwing trash onto mine.